Our mission at Divvy is to make homeownership accessible to everyone, but in order to do so, we must understand the historical practices that have led to mass housing injustice. At Divvy, we are committed to taking a hard look at the housing industry to understand the role systemic racism has played, the state of the industry today, and how we can be part of the solution.

That is why we are publishing a series of three blog posts titled “Understanding and Dismantling Systemic Racism in Housing.” In this series, we’ll look at the history of racism in the housing industry over the last 150 years, examining the various ways inequality has been cemented within the laws and practices of the industry. We’ll also discuss how these structures of oppression can be removed and replaced with structures of opportunity in order to make the housing industry more equitable now and in the future.

If you missed Part 1, we encourage you to read it here. In Part 2, below, we will discuss how systemic racism played a role in the subprime mortgage crisis, the factors that led up to it, and the many consequences for families and communities.

Part 2: The Recent History of Racism in the Subprime Mortgage Crisis

The subprime mortgage crisis had a deep and lasting impact on the housing market in this country. It wiped out the wealth of many families and made it impossible for others to buy a home at all. But the crisis did not affect all families equally.

We will examine several aspects of the crisis:

1. The Shocking Use of Financial Redlining

Due to a legacy of financial exclusion and predatory lending practices, Black and Latino families were more likely to be victimized by subprime loans.

A history of systemic racism in the home finance industry has often blocked people of color from having the same access to credit and homeownership as whites. We covered some of this history in Part 1 of this series. Sadly, it was this history that made it possible for unscrupulous lenders to take advantage of Black and Latino families in the height of the subprime mortgage boom.

One of the defining characteristics of the subprime mortgage crisis was that mortgage lenders and banks had an insatiable appetite for new loans, especially subprime loans which they could sell or package into mortgage-backed securities. That aspect of the crisis is fairly well known. What is less well known is that these institutions were also targeting Black and Latino borrowers for subprime loans even when they should have qualified for better loan terms. This is referred to as financial redlining.

According to a New York Times report in 2009, loan originators at one large bank (Wells Fargo) purposefully targeted traditionally underserved communities for subprime loan products and steered borrowers of color to higher-cost loans. In fact, documents from court cases and interviews with former employees of the company show evidence of systematic targeting of neighborhoods that were made up primarily of Black or Latino families. (Source)

The New York Times quotes Beth Jacobson, a former loan officer at Wells Fargo, who describes the bank’s process for “systematically singling out Blacks in Baltimore and suburban Maryland for high-interest subprime mortgages.” Employees of the bank took great pains to target minority communities and convince them to apply for subprime loan products. “We just went right after them,” said Ms. Jacobson, who is white and said she was once the bank’s top-producing subprime loan officer nationally. (Source)

A separate analysis by the Center for Responsible Lending (CRL) found that Black and Latino borrowers were 30% more likely to get subprime loans with higher interest rates than white borrowers with similar risk characteristics. In its landmark report, Lost Ground, 2011: Disparities in Mortgage Lending and Foreclosures, the CRL found a huge disparity of interest rates among borrowers with a FICO score of 660 or higher (i.e. those who would typically qualify for the lowest interest rates). (Source) The chart below shows the difference for Black, Latino, and white borrowers. 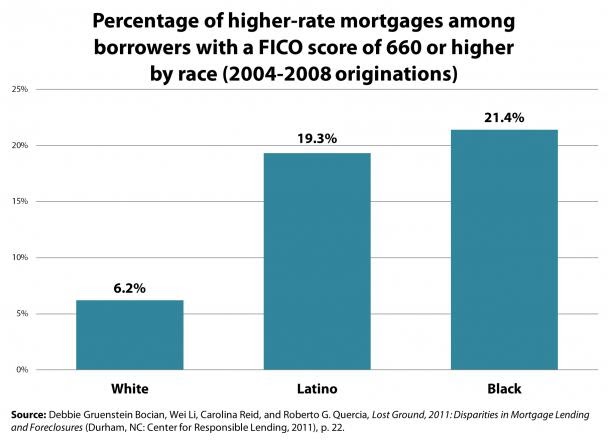 Let’s be clear: a subprime mortgage costs its borrowers far more than a prime mortgage for the same loan amount. A borrower who gets locked into a $165,000 mortgage with an interest rate that is three percentage points higher than a prime loan would pay an extra $100,000 in interest payments over the life of the loan.

To understand just how unfair and biased some of these practices were, we can look at a research paper authored by Jacob Faber, a PhD candidate at the NYU Department of Sociology. He analyzed Home Mortgage Disclosure Act data on 3,819,923 loan applications made in 2006 and found that, all other things being equal, Black and Latino families were 2.4x more likely to receive a subprime loan than white applicants. The disparity was even worse for Black and Latino families in higher-income brackets. (Source)

As shown in the next section, the consequences of these racist practices were devastating for those affected.

2. How Foreclosures Hurt Families and Widened the Wealth Gap

Because of the predatory practices outlined above, Black and Latino families were more likely to face foreclosure, which had incredibly damaging results including widening the wealth gap.

In Lost Ground, 2011: Disparities in Mortgage Lending and Foreclosures, the Center for Responsible Lending analyzed foreclosure data and found that Black and Latino borrowers were much more likely to be foreclosed upon than other borrowers. Other studies have confirmed this finding. The chart below demonstrates the difference:

The report also found that 8% of both Black and Latino families in the U.S. lost their homes to foreclosure during this period, compared to just 4.5% of white families. (Source)

Essentially, the same neighborhoods that had been targeted by lenders for predatory subprime loans just a few years earlier were now the site of massive foreclosures. The poisoned seeds of the crisis were planted in 2004, 2005, and 2006. From 2008 and onward, they bore rotten fruit in the form of thousands of homeowners losing their homes.

To see how this cycle of predatory practices, higher interest rates, and foreclosures harmed not just families, but also communities, it’s helpful to look at a single city. The exorbitant costs and tricky terms of the subprime loans that were pushed on many of these borrowers were devastating for individual families and for Baltimore as a whole. Data released by the City of Baltimore as part of a lawsuit against Wells Fargo showed that, among the bank’s properties that were foreclosed upon from 2005 to 2008, more than 50% stood vacant and 71% of those were in predominantly Black neighborhoods. (Source)

Even the families who had owned their homes long before this particular crisis were affected by the vacant homes and declining property values in their city. Picture yourself as an owner who managed to avoid foreclosure: how devastating would it be to see half your neighborhood forced out while their houses sat vacant and decaying? The end result was that both individual families and whole communities were devastated by the systemic racism that drove the subprime housing crisis.

Beyond individual communities, the impact of these practices can be seen nationwide as the wealth gap between Black and Latino households and white households grew even larger than before.

The sheer amount of wealth lost by minority families is staggering. When accounting for the loss of home equity, the decline in home values for those who kept their homes, and secondary consequences borne by cities, the subprime mortgage crisis destroyed $194 billion of wealth in Black communities and $177 billion of wealth in Latino communities, according to the Center for Responsible Lending. (Source)

Even in the post-crisis era that we’ve now entered, things have not necessarily gotten better. Black and Latino people are once again being disproportionately denied access to homeownership, as we’ll discuss in the next section.

3. Closing Off Opportunities to Own a Home

Aspiring Black and Latino homeowners are again facing discrimination in mortgage approvals. This means that, despite promises for equality, they still aren’t getting access to the same opportunities as others.

The subprime mortgage crisis may feel like history when looking back at it from 2020. But we cannot ignore that even today, it remains harder for Black people to own a home than for people of other races, particularly whites.

An in-depth investigative report published in 2018 by Reveal News demonstrates just how prevalent systemic racism still is in the home financing industry. The non-profit news organization analyzed 31 million records made public by the Home Mortgage Act, and uncovered what they call “modern-day redlining” in 61 metropolitan areas throughout the country. (Source)

Cities where Black home buyers faced unfair resistance from lenders included Atlanta, Detroit, Philadelphia, St. Louis, San Antonio, Gainesville, and Iowa City, according to their analysis, which was independently reviewed and confirmed by The Associated Press.

Looking at just one such city is instructive. In Philadelphia, Reveal found that Black home buyers were 2.7 times as likely as whites to be denied a conventional mortgage. This leads to huge disparities in who gets to become a homeowner. While the City of Philadelphia has roughly the same number of Black and white residents, the data shows that whites received 10 times as many conventional mortgage loans in 2015 and 2016. (Source)

An example from the Reveal News article shows how this affects an individual home buyer. They follow the story of a woman named Rachelle Faroul and her many attempts to get approved for a mortgage in Philadelphia. She initially was denied a loan because her income wasn’t consistent enough, despite earning around $60,000 per year. After getting a new, full-time, job and re-applying for a mortgage, her application got delayed for months and then declined again. The lender kept asking for documents she had already sent and eventually disqualified her based on an unpaid utility bill for an apartment she no longer lived in. (Source)

This story is just one example of how systemic racism blocks Black and Latino applicants in particular from getting access to homeownership. For another example, the report identified a single lender, Philadelphia Mortgage Advisors, that made nearly 90 percent of its loans to white borrowers in 2015 and 2016, despite operating in a city that has an equal number of Black and white residents. (Source)

Equally shocking is the extent to which banks allocate resources to serve different communities. The report found that banks placed nearly three-quarters of their branches in white-majority neighborhoods. Decisions like this put up further barriers to disenfranchised communities and potentially made it harder for them to buy homes. (Source)

Black and Latino families have been unfairly excluded from many forms of credit for decades. In the subprime mortgage crisis, lenders used this history of exclusion as an opportunity to prey upon these communities by offering them loans with higher interest rates and worse terms overall. Mortgage backed securities enabled lenders to pool low- and high-risk loans to sell on the secondary market, which made them hungry for more and more loans in the run up to the crisis.

These large financial institutions, including banks like Wells Fargo and others, specifically targeted Black and Latino families to sell as many subprime loans as possible. Not only were Black and Latino families more likely to lose their homes to foreclosure, but they also lost more of their wealth during the crisis than white families. Now, in the period after the crisis, these same families are still disproportionately denied for conventional mortgage loans.

It is important to understand this history but also to take steps to make things more equal. That is why we are committed to not only educating our readers on these topics but also taking concrete actions to make our industry more equal. In Part 3 of this series, we will examine possible solutions that can address this history of systemic racism in housing, including how we at Divvy Homes can begin to break down these barriers to homeownership.